TÁBARA AND ITS MUNICIPAL HOSTEL 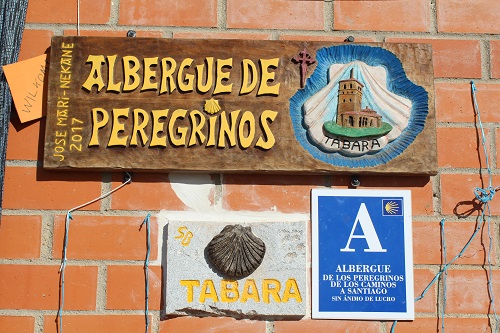 Tábara has always been characterized as an eminently hospitable population, welcoming pilgrims and outsiders who reached it.

Already in the 10th century, the monastery of San Salvador, which had become an ecclesiastical and power center of the lands of Tábara, welcomed the pilgrims who arrived as they traveled their way to Compostela to show their respect to one of the disciples of the master.

In this monastery, there was a very relevant desk that saw the birth of some very important codices at the time, currently we keep three of them (Beato Morgan, Beato de Tábara and Beato de Gerona), in the latter one of the oldest images, probably the oldest, of the pilgrim apostle in one of his most representative sheets, in which reference is made to Iacobus Hispania.

Later, in the 16th century the marquis of Tábara, Don Bernardino Pimentel, indicated in his will that a stay should be enabled to welcome the pilgrims who will pass through the villa.

The 19th century saw the birth of one of the most illustrious poets given by our literature, some consider it the pilgrimage poet, because León Felipe throughout his life was an eternal pilgrim who knew how to sing like no one the pilgrims who traveled to Compostela.

Tábara is on the first day that pilgrims must face when they walk the Sanabrian road and it is a must stop for those who face this pilgrimage. That is why, in 2004, the town hall of Tábara built some facilities to welcome pilgrims heading towards Compostela.

It was one of the first hostels built in the province of Zamora. The hostel of the capital was not yet in operation, when Tábara already provided welcome to the pilgrims arriving. It was a very worthy facility at the time. The new hostel had a large kitchen where the pilgrim could meet all the needs of that day, a shower to get rid of what had been accumulating during the day he had left behind, two bathrooms and a room in which seven literas had been arranged that took fourteen pilgrims.

It was a time when the pilgrimage was still a little incipient, so these facilities overcame the objective for it to be conceived, since those who arrived to the hostel found a welcome that they had not dispensed with in many places of their pilgrimage.

From the first moment, fulfilling the legacy of the will of the lord of this land, the Tábara Corporation was aware that the pilgrimage should not become a business, although one seeks to generate wealth for the sites for which he travels and the pilgrims he received, was not charged for its use, only one donation was requested to help maintain the facilities.

From 2004 to 2014, the hostel was performing this function for which it had been conceived and the pilgrims found shelter even though the facilities were not attended by the figure of a permanent hospital.

It was in 2014, when the management and association were changed the spirit of Santi, assumed the responsibility of permanently maintaining a person to welcome those who arrived and José Almeida, a pilgrim and a hospital of vocation, took over the facilities.

Undoubtedly, this new form of reception represented an important change to offer traditional hospitality at the Tábara municipal hostel, because hospitality means that, sharing what is currently available at the hostel.

The first years of this new reception, it was necessary to condition the facilities for the needs that the hostel would have. Install a termo with more capacity for everyone to have hot water, a larger refrigerator, a washing machine, a ceramic hob, a dishwasher, a wood stove, change bunk beds and mattresses after 20 years…. There were numerous changes that had to be made to adapt the hostel to the new needs of pilgrims.

It began a different way of welcoming those who arrived, who in a short time got the pilgrims to emphasize the importance of this place, recommending it to all those who were about to travel this long route of pilgrimage. The washing of clothes for each day, receiving those who arrived with a cold or hot drink and a welcome gift, sharing a community dinner or breakfast provided to them every morning, made the hostel begin to acquire a relevance, which for many pilgrims was becoming a place that should not be overlooked in their pilgrimage.

Although the facilities were very dignified, it was necessary after two decades to make a significant improvement, because all the pilgrims in the same room represented a massification that was not satisfactory and sometimes, when several pilgrims arrived, the hot water from the thermo was insufficient to have a satisfactory shower.

The pandemic we have experienced was a nightmare for many hostels and for the most adverse situations, the most positive must always be extracted and in this case, represented the opportunity to adapt the facilities to current times.

The Department of Culture and Tourism of the Provincial Council of Zamora has made provision for the improvement and reform of the municipal hostels that existed in the province and the municipality of Tábara, benefiting from these aids to make a significant improvement in the hostel of its people.

It has resulted in a considerable effort by the City Council of Tábara and the Provincial Council of Zamora to obtain facilities in line with the times we have to face and the change that the Municipal Hostel of Tábara has undergone has been very significant.

The old quarter of the pilgrims, which welcomed all those who arrived, has been divided into two new rooms. One will be destined for the hospital that from now on will be trained in our hostel and the other room will be used by those elderly pilgrims or who go on their pilgrimage carrying some injury and can rest the days they need, without being imported by those who have arrived that day.

An extension of the hostel has been built with two large new rooms, with single beds and with space between them, enough not to feel that burdensome that is sometimes found in places that accommodate many people. There are also two bathrooms, one for pilgrims with two sinks, two bathrooms and two large showers, as well as for the pilgrims, who also have their respective toilet place.

The capacity of the hostel has expanded considerably, so that no pilgrim will be left without a covered place to rest after a hard and demanding journey, even when the pilgrimage intensifies along this road.

Another of the new things that pilgrims will tell, is a garden with a dozen and a half fruit trees in which lawn, tables, banks and a fountain will be installed and will be the ideal place to rest from a long day. This garden will be known as the garden of Eve, as it bears this name by the hospital that planted them, making it possible for fruit trees to offer their fruit to the pilgrims who arrived.

The traditional reception offered at the municipal hostel of Tábara is done throughout the year, because although the winter months the pilgrimage slows down until almost wearing, there will always be a pilgrim who needs a roof in which to shelter and for that, he will have this hostel in which he will always have a warm welcome.

The new facilities now offered by the municipal hostel in Tábara to pilgrims who decide to stay after a hard day will continue to offer those who arrive the washing of clothes of the day, a warm welcome, a rewarding community dinner in which they can share with the rest of the pilgrims the sensations that this day has provided them and in the morning, a comforting breakfast to be able to face with guarantees the new day they have before, in exchange