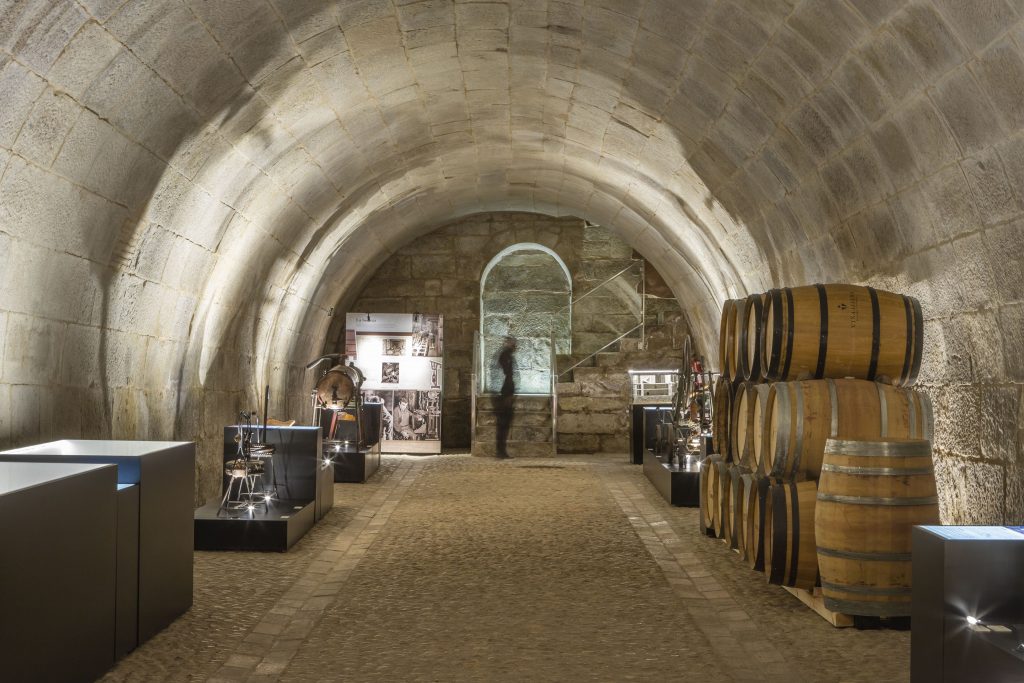 The vine and wine are present in the Jacobean tour and we will find them in the landscape that the walker observes, in the art he discovers, in rituals and in devotions.

This exhibition aims to unite the culture of wine with the Jacobean pilgrimage and does so in a singular space of Logroño, Ruavieja Street, which has been traveled by pilgrims over the centuries and under their feet the wines that throughout history have produced the city.

Its location in two adjacent spaces, the Espacio Lagares and the Calado de San Gregorio, is due to the fact that in one of them we find some ancient lagars and in the other an old winery that was able to welcome the walkers in those pilgrimages of yesteryear.

We invite you to listen, read and feel the history of the street that is Camino and is the street of wine and is also the axis of the hospitality that the city has offered to the Jacobean pilgrims.

A wine-making space built in the 18th century houses the first part of the exhibition, in which you can see the pissing lizards and two banasta presses that served to finish the must extraction. In front of them, there are three large lakes where red wines were made, depositing grapes in whole bunches in these spaces.

These archaeological structures are completed with panels describing the use and function of lagars and with a videomapping that describes in an intuitive and imaginative way the elaboration of red wines in the 18th century in the same lakes over which the image is projected.

The visitor will have to cross the Camino de Santiago on Ruavieja Street to access the second exhibition space. It is a renovated building on the bottom of which was a winery.

The Camino de Santiago and hospitality

On the ground floor of this new space, the Jacobean theme will be the descriptive axis, but linked to the primordial product that was elaborated in this street logroñesa: wine.

The Jacobean itineraries that cover the Autonomous Community of La Rioja are described, relating the Camino del Ebro with the legendary history of the stay of Santiago in La Rioja. The hospitality, which had its center in hospitals and monasteries, has a prominent section because it is the basis of the pilgrimage in the Middle Ages.

A large curved panel describes the relationship between the pilgrimage path and the culture of vine and wine. Art, legend, oral tradition, history and story are mixed with a careful aesthetic to show the visitor the relations that the wine culture has had with the Jacobean itinerary.

The Street of Wine

Ruavieja Street is the space with the largest number of wineries in the history of the city of Logroño. The different panels describe their type and form of excavation, construction and location on this track from the 18th century to the present time.

This street has been the origin and cradle of Logroñés wine and some characters from local history such as Juan Delhuyar, Espartero, the marquis of Murrieta and the one of Vargas or Ildefonso Zubía, among others, had a winery in this area of the old town of Logroñés.

The documentary La Calle del Vino completes the space. In it, the historical characters who have lived on this street tell us the life of it at different historical moments.

The lower floor corresponds to the winery of the old building and may be related to the wine-making space that the visitor has known in the first area, on the other side of the street of wine.

The winery itself is already a patrimonial element, but to understand it in its complexity we have installed the few objects our ancestors used to store, manipulate and trade wine. Museum objects belonging to the collection of the Vivanco Museum of Wine Culture, perhaps the most important museum in the world in its field.

Once the route through the exhibition is over, the visitor will have understood the importance of wine in this part of the city of Logroño and its close relationship with the Camino de Santiago that crosses its urban area longitudinally.